3-Stage Smart Air Purifier for Extra Large Rooms
When purchases are made through links on our site we may earn an affiliate commission. As an Amazon Associate we earn from qualifying purchases. The price you pay is the same.
Rating
96.1
Excellent 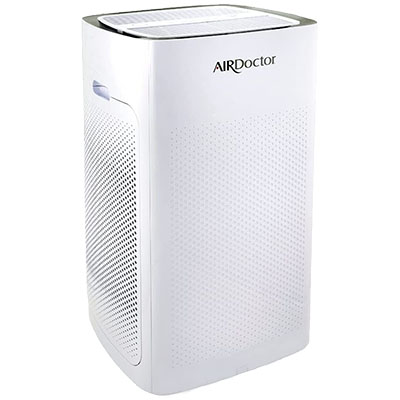 AirDoctor states the H13 UltraHEPA filter as being medical grade, and they've done some testing to demonstrate its effectiveness. The pre-filter takes care of larger particles and the Carbon/Gas Trap/VOC filter removes gases, odors, ozone and VOCs from the air.

The manufacturer makes specific note of the 5000's ability to capture bacteria, mold, pet dander, pollen, smoke and viruses. They have also performed testing on their purification and note a proven capability to trap particles 100 times smaller than the HEPA standard.

EnergyStar suggests the 5000 model for rooms up to 828 square feet while the manufacturer notes that in one hour the AirDoctor 5000 completely changes all the air in a 1,001 square foot room four times. That equates to 2 ACH (air changes per hour) in a 2,001 square foot room.

Leveraging its PM 2.5 particle sensor the air purifier can monitor the air and set the fan speed according to the air quality. We think this is a must with any air purifier and welcome the feature. From a technology standpoint, that is all you'll find. But, that is also part of the allure of the AirDoctor 5000: it's simplicity.

AirDoctor's has a simple, easy-to-understand, line of air purifiers. Each AirDoctor air purifier uses the same air filter technologies and simple controls. The differences in their models is the room sizes the have been developed for.

Methods the air purifier uses to clean the air.

EnergyStary ratings (shown if the air purifier is EnergyStar certified).

Available features and options when operating the air purifier.

App integration and other technologies supported by the air purifier.

Color, dimensions and other physical and visible characteristics of the air purifier.

Power consumption and specifications for the air purifier.

The manufacturer warranty and certifications for the air purifier.